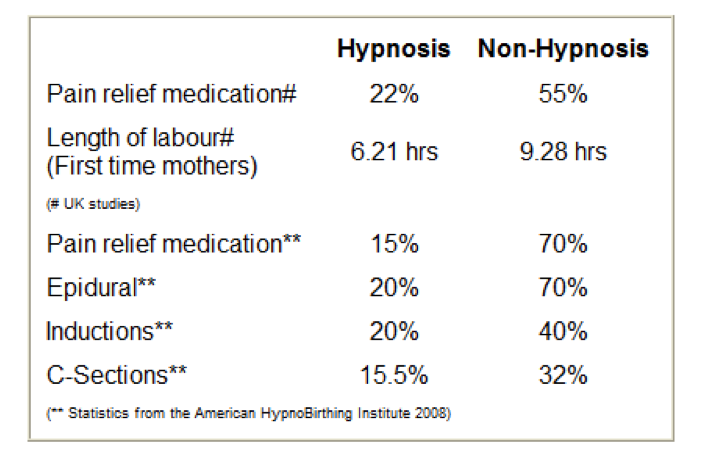 This is where you will find a summary of scientific research into the use of hypnosis for labour and childbirth. Most of the studies below are randomized (the ‘gold standard’ for research), involve large numbers, include control groups and demonstrate statistical significance. The community is still working tirelessly to encourage more research to demonstrate the outstanding benefits for the use of hypnosis for childbirth preparation. In 2012 The Royal Society of Medicine will be lecturing on the benefits of Hypnosis for pregnancy and birth. Details of its findings will be published soon…so watch this space!

Journal of Family Practice – “Effects of Hypnosis on the Labor Processes and Birth Outcomes of Pregnant Adolescents” states in its conclusion that:

“Our study provides support for the use of hypnosis to aid in preparation of obstetric patients for labour and delivery. The reduction of complications, surgery, and hospital stay show direct medical benefit to mother and child and suggest the potential for a corresponding cost-saving benefit.”

Effect of hypnosis on length of labour

Hao et al in China measured the effect of nursing suggestions to labouring women and recommends that the conversation of the nurses be “controlled carefully for the purpose of advancing the birth process”. This randomized control trial examined 60 first time mothers with a matched control group of 60 first time mothers and found a statistically significant reduction in the lengths of the first and second stages of labour.

Jenkins and Pritchard found a reduction of 3 hours for prim gravid women (from 9.3 hours to 6.4 hours) and 1 hour for multi gravid women (from 6.2 hours to 5.3 hours) for active labour (262 subjects and 600 controls). Pushing was statistically shorter for first time mothers (from 50 min to 37 min).

In a study that compared hypnosis and Lamaze training, 96 women chose between hypnosis (n=45) and Lamaze (n=51). The first stage of labour was shortened in the hypnosis group by 98 minutes for first time mothers and by 40 minutes for second time mothers. These women were more satisfied with labour and reported other benefits of hypnosis such as reduced anxiety and help with getting to sleep.

Mellegren noted a reduction of two to three hours of labour.

Abramson and Heron found a shorter first stage of labour for 100 women trained with hypnosis (by 3.23 hours) compared to a control group of 88 women. Forty-five ‘Hypnosis for Childbirth’ clients (first time mothers) had an average of 4.5 hours for the active labour, a significant reduction compared to the usual 12 hours.

A retrospective survey notes an epidural rate of 18 percent in Southern Ontario, where the epidural rate in most hospitals is 40 to 95 percent (depending on the setting) for first time mothers.

In a randomized control trial of 42 teenagers in Florida, none of the 22 patients in the hypnosis group experienced surgical intervention compared with 12 of the 20 patients in the control group (p=.000).

Harmon, Hynan and Tyre reported more spontaneous deliveries, higher Agpar scores and reduced medication use in their study of 60 women. Of the 45 ‘Hypnosis for Childbirth’ clients, 38 delivered without the use of caesarean, forceps or vacuum, a rate of spontaneous birth of 84%. This is a higher than average rate of normal birth for the general population of first time mothers.

In a randomized control trial of 42 teenagers in Florida, only 1 patient in the hypnosis group had a hospital stay of more than two days compared with 8 patients in the control group (p=.008).

McCarthy provided five 30-minute sessions to 600 women and found a virtual absence of postpartum depression, compared to the typical rates of 10 to 15 percent. Women with a history of postpartum depression did not develop this condition, even though an estimated 50 percent eventually do. Harmon et al also reported lower depression scores in the hypnotically treated group.

It appears that a simple intervention, hypnotherapy, has far-reaching effects both medically and socially.

Included With The Course


Click here for inspiration & advice for a better birth experience!

Outstanding! Easy-to-learn relaxation and breathing patterns guided me through a five hour, pain-free labour. I will treasure the experience forever!

Latest from the blog 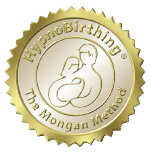